The generalized least squares (GLS) estimator of the coefficients of a linear regression is a generalization of the ordinary least squares (OLS) estimator. It is used to deal with situations in which the OLS estimator is not BLUE (best linear unbiased estimator) because one of the main assumptions of the Gauss-Markov theorem, namely that of homoskedasticity and absence of serial correlation, is violated. In such situations, provided that the other assumptions of the Gauss-Markov theorem are satisfied, the GLS estimator is BLUE.

These assumptions are the same made in the Gauss-Markov theorem in order to prove that OLS is BLUE, except for assumption 3.

In the Gauss-Markov theorem, we make the more restrictive assumption that where is the identity matrix. The latter assumption means that the errors of the regression are homoskedastic (they all have the same variance) and uncorrelated (their covariances are all equal to zero).

Instead, we now allow for heteroskedasticity (the errors can have different variances) and correlation (the covariances between errors can be different from zero).

Since is symmetric and positive definite, there is an invertible matrix such that

If we pre-multiply the regression equation by , we obtain

Defineso that the transformed regression equation can be written as

Proposition The OLS estimator of the coefficients of the transformed regression equation, called generalized least squares estimator, is

The estimator is derived from the formula of the OLS estimator of the coefficients of the transformed regression equation: 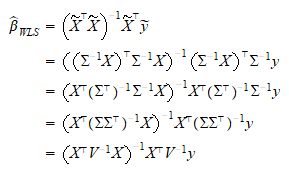 Furthermore, we have that is full-rank (because and are). Moreover,and 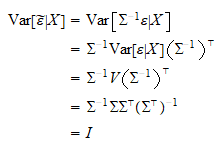 Therefore, the transformed regression satisfies all of the conditions of Gauss-Markov theorem, and the OLS estimator of obtained from (1) is BLUE.

that is, it minimizes the sum of squared residuals.

The GLS estimator can be shown to solve the problem

The function to be minimized can be written as

It is also a sum of squared residuals, but the original residuals are rescaled by before being squared and summed.

When the covariance matrix is diagonal (i.e., the error terms are uncorrelated), the GLS estimator is called weighted least squares estimator (WLS). In this case the function to be minimized becomes

where is the -th entry of , is the -th row of , and is the -th diagonal element of . Thus, we are minimizing a weighted sum of the squared residuals, in which each squared residual is weighted by the reciprocal of its variance. In other words, while estimating , we are giving less weight to the observations for which the linear relationship to be estimated is more noisy, and more weight to those for which it is less noisy.

Note that we need to know the covariance matrix in order to actually compute . In practice, we seldom know and we replace it with an estimate . The estimator thus obtained, that is,

There is no general method for estimating , although the residuals of a fist-step OLS regression are typically used to compute . How the problem is approached depends on the specific application and on additional assumptions that may be made about the process generating the errors of the regression.

Example A typical situation in which is estimated by running a first-step OLS regression is when the observations are indexed by time. For example, we could assume that is diagonal and estimate its diagonal elements with an exponential moving average