We are now going to introduce decision trees, popular machine learning models that are also widely used as base learners in gradient boosting.

In this example, two features are used to classify the data into three sub-groups.

The three sub-groups are as follows:

Note that also the observations whose inputs are missing are assigned to the sub-groups.

The next figure clearly shows how the decision tree subdivides the space of inputs into regions over which output predictions are constant. 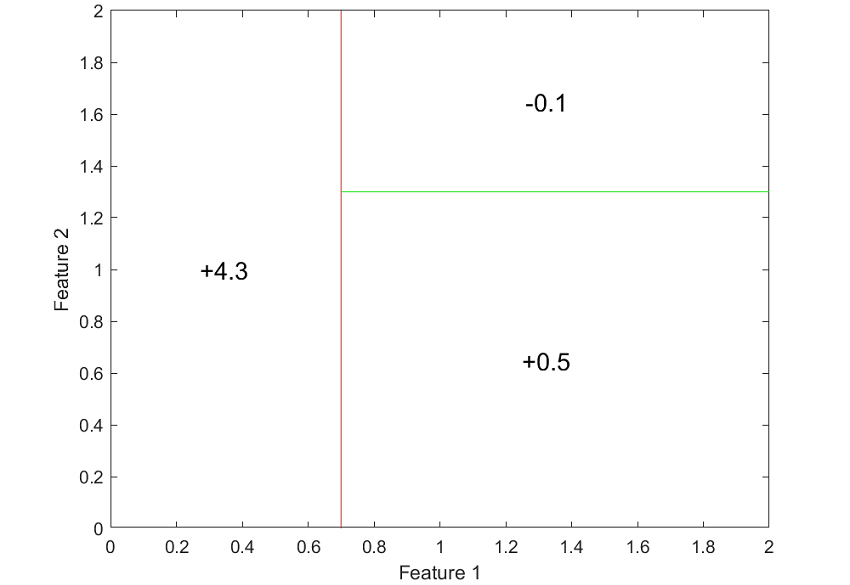 The sub-groups are often called leaves, while intermediate splits that do not immediately lead to the formation of a leave are called internal nodes. The lines joining the various nodes and leaves are called branches.

The largest number of splits made before reaching a leaf is called the depth of the tree.

These questions have no unique answer and many different algorithms for growing decision and regression trees have been proposed in the literature (see the Wikipedia article on decision tree learning for a review).

One of the most popular algorithms is CART (Classification And Regression Trees), which is used by the tree-training functions implemented in the scikit-learn package we are using. CART is a greedy algorithm that recursively splits sub-groups. The input variables and the thresholds used for the splits are chosen so as to minimize a measure of diversity among the output values included in a sub-group (e.g., variance for regression; entropy for classification).

In general, I would recommend not to re-invent the wheel and use the tree-construction algorithms implemented in standard machine-learning software, as they are usually highly optimized and thoroughly tested.

Tree-construction algorithms usually have some hyper-parameters that allow us to control overfitting.

Use in gradient boosting

We often use decision trees as base learners in gradient boosting. Remember that base learners are usually required to be very simple models, affected as little as possible by overfitting. Therefore, what we usually do in gradient boosting is to train depth-2 decision trees (two internal nodes, four leaves), which are pretty simple but allow for interactions between input variables.

An important detail about decision trees is how missing values are treated.

When an observation has a missing value for a certain input, and that input is used to classify the observation into one of two sub-groups, then the observation is assigned to the majority class (i.e., the sub-group that contains the largest number of observations from the training sample).

A decision tree can be seen as a linear regression of the output on some indicator variables (aka dummies) and their products.

In fact, each decision (input variable above/below a given threshold) can be represented by an indicator variable (1 if below, 0 if above).

In the example above, the tree

can be represented as

which in turn can be written as a constant plus a linear combination of the variables , ,

What is the main advantage of using decision trees to build predictive models?

When should we use decision trees instead of linear regressions?

The short answer is that decision trees, especially when used as base learners in a boosting algorithm, allow us to capture nonlinearities in the data that cannot be captured by linear regressions, for example:

Note that, by building a decision tree, we partition the input space into regions over which is constant; in each region, the constant is equal to the average output over that region.

Thus, is similar to the Nadaraya-Watson kernel regression estimator of the conditional expected value of given . The only difference is that the kernel density estimator is replaced by the naive density estimator described by Fix and Hodges (1951) and Pagan and Ullah (1999). By using arguments similar to those used for the Nadaraya-Watson estimator, it is possible to prove that converges to the expected value of given (which is the best possible prediction of given ) as the sample size goes to infinity and the complexity of the tree increases.

This probably sounds too technical, but the bottom line is: decision/regression trees not only work well in practice, but they are theoretically sound, as they enjoy good asymptotic properties. Their predictions converge to the best possible predictions!

We are going to train a regression tree on the same inflation dataset used previously.

We will use the squared error as a loss function.

We are going to train a single model and we will do no model selection. Therefore, we will not need a validation set. We instead create two test sets. Shortly you will understand why.

We now train a regression tree with all the 113 input variables.

We set the maximum depth of the tree to 4.

By chance, we got something that often happens with a single decision tree.

We obtained an impressive performance on test_set_1 (better than any model we have trained thus far), but the performance was much lower on test_set_2. Obtaining very different performances on different test sets is something that often happens with decision trees, as they are known to be non-robust, especially if there are leaves containing few observations.

In the next section we re-run the code by requiring that each leaf should contain at least 10 observations.

Train the same tree with min_samples_leaf = 10

The performance is more homogeneous across the two test sets.

Pagan, A. and Ullah, A., 1999. Nonparametric econometrics. Cambridge university press.