Basis of a linear space

Let us start with a formal definition of basis.

Definition Let be a linear space. Let be linearly independent vectors. Then, are said to be a basis for if and only if, for any , there exist scalars , ..., such that

In other words, if any vector can be represented as a linear combination of , then these vectors are a basis for (provided that they are also linearly independent).

Example Let and be two column vectors defined as follows.

These two vectors are linearly independent (see Exercise 1 in the exercise set on linear independence). We are going to prove that and are a basis for the set of all real vectors. Now, take a vector and denote its two entries by and . The vector can be written as a linear combination of and if there exist two coefficients and such thatThis can be written as 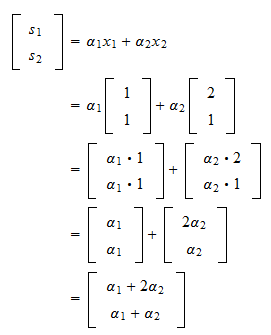 Therefore, the two coefficients and need to satisfy the following system of linear equationsFrom the second equation, we obtainBy substituting it in the first equation, we getorAs a consequence,Thus, we have been able to find two coefficients that allow us to express as a linear combination of and , for any . Furthermore, and are linearly independent. As a consequence, they are a basis for .

An important fact is that the representation of a vector in terms of a basis is unique.

Proposition If are a basis for a linear space , then the representation of a vector in terms of the basis is unique, i.e., there exists one and only one set of coefficients such that

The proof is by contradiction. Suppose there were two different sets of coefficients and such thatIf we subtract the second equation from the first, we obtain

The replacement theorem states that, under appropriate conditions, a given basis can be used to build another basis by replacing one of its vectors.

Proposition Let be a basis for a linear space . Let . If , then a new basis can be obtained by replacing one of the vectors with .

Because is a basis for and , there exist scalars , ..., such thatAt least one of the scalars must be different from zero, because otherwise we would have , in contradiction with our hypothesis that . Without loss of generality, we can assume that (if it is not, we can re-number the vectors in the basis). Now, consider the set of vectors obtained from our basis by replacing with :If this new set of vectors is linearly independent and spans , then it is a basis and the proposition is proved. First, we are going to prove linear independence. Suppose

for some set of scalars . By replacing with its representation in terms of the original basis, we obtain

Because are linearly independent, this implies thatBut we know that . As a consequence, implies . By substitution in the other equations, we obtainThus, we can conclude that

Because is a basis, there are coefficients such that

From previous results, we have thatand, as a consequence,

Thus, we can write

This means that the desired linear representation

is achieved withAs a consequence, span . This concludes the second and last part of the proof.

By reading the proof we notice that we cannot choose arbitrarily the vector to be replaced with : only some of the vectors are suitable to be replaced; in particular, we can replace only those that have a non-zero coefficient in the unique representation

Existence of a basis

The basis extension theorem implies that every finite-dimensional linear space has a basis. This is discussed in the lecture on the dimension of a linear space.

All the bases of a space have the same cardinality

Another important fact, which will also be discussed in the lecture on the dimension of a linear space, is that all the bases of a space have the same number of elements.