Inverse of a matrix

The concept of inverse of a matrix is a multidimensional generalization of the concept of reciprocal of a number:

Let us start with a definition of inverse.

Definition Let be a matrix. Its inverse, if it exists, is the matrix that satisfieswhere is the identity matrix. If exists, then we say that is invertible.

When , then and which makes clear that the definition above generalizes the notion of reciprocal of a number.

Example Consider the matrix Then, we can verify thatby carrying out the multiplication between the two matrices: 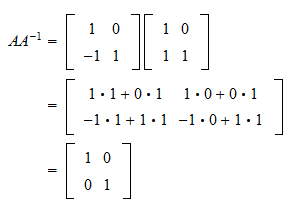 Existence of the inverse

Under what conditions is a square matrix invertible? The next proposition answers this question.

Proposition A matrix is invertible if and only if it is full-rank.

Thus, is invertible and We are now going to prove the "only if" part (invertibility implies full-rank). If an inverse exists, thenPost-multiplying both sides of the equation by any vector , we getorThus, any vector can be written as a linear combination of the columns of , with coefficients taken from . In other words, the columns of span the space of all vectors. If they were not linearly independent, then we would be able to eliminate some of them and obtain a set of linearly independent vectors that 1) is a basis of the space of all vectors; 2) has cardinality less than . But this is not possible because any basis of has cardinality equal to (see the lecture on standard bases). Therefore, the columns of must be linearly independent, which means that has full rank.

Uniqueness of the inverse

Proposition If the inverse of a matrix exists, then it is unique.

In the proof that a matrix is invertible if and only if it is full-rank, we have shown that the inverse can be constructed column by column, by finding the vectors that solvethat is, by writing the vectors of the canonical basis as linear combinations of the columns of . Since the representation of a vector in terms of a basis is unique, the vectors are unique. But the latter are the columns of . Therefore, also is unique.

Proposition Let be a matrix. If its inverse exists, it satisfies not only the conditionbut also the conditionwhere is the identity matrix.

Inverse of a product

Proposition Let and be two matrices. Then, the product is invertible if and only if and are invertible. Furthermore,

In other words, the product is full-rank only if and are full-rank. Furthermore, it can be easily checked that satisfies the definition of inverse of :

Inverse of the transpose

The next proposition shows how to compute the inverse of the transpose of a matrix.

We have thatBy transposing both sides of the equation, we obtainbecause the identity matrix is equal to its transpose. By using the formula for the transposition of a product, we getSo, satisfies the definition of inverse of .

We need to carry out the multiplication between the two matrices: 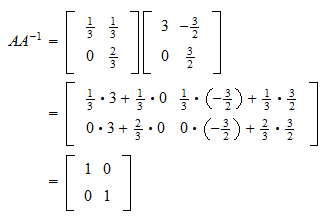 Their product is equal to the identity matrix, so is indeed the inverse of .

Let , and be full-rank matrices. Express the inversein terms of the inverses of , and .

We have to repeatedly apply the formula for the inverse of a product:

By definition, the inverse of needs to satisfyButAs a consequence,