Importance sampling is a variance reduction technique used to reduce the variance of the approximation error made when approximating an expected value with Monte Carlo integration.

Importance sampling is based on a simple technique that allows us to compute expected values in many different but equivalent ways.

The next proposition shows how the technique works for discrete random vectors.

where we have usedas a shorthand for the multiple integral over the coordinates of .

Suppose we need to compute the expected value of a function of a random vector by Monte Carlo integration.

The standard way to proceed is to use a computer-generated sample ,..., of realizations of independent random vectors ,..., having the same distribution as , and use the sample mean to approximate the expected value.

Thanks to the propositions in the previous section, we can compute an alternative Monte Carlo approximation of by extracting independent draws from the distribution of another random vector (in what follows we assume that it is discrete, but everything we say applies also to continuous vectors) and by using the sample mean

as an approximation. This technique is called importance sampling.

In the standard case, the approximation error isand its variance is

In the case of importance sampling, we have 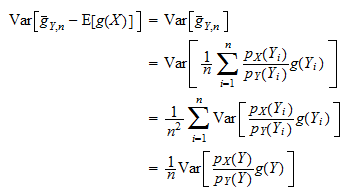 Ideally, we would like to be able to choose in such a way that is a constant, which would imply that the variance of the approximation error is zero.

The next proposition shows when this ideal situation is achievable.

Proposition If for any , thenwhen has joint probability mass function

The ratio is constant if the proportionality conditionholds. By imposing that be a legitimate probability density function, we get

as an approximation. We have also seen that this approximation has small variance when the probability mass function of puts more mass than the probability mass function of on the values of for which is larger. This makes intuitive sense: if is larger at some points, then we should try to sample more frequently at those "important" points (in order to be more accurate about the value of at those points); then, when we average our samples, we should take into account the fact that we over-sampled the important points by weighting them down with the weights which are smaller than when is smaller than .

Let us now illustrate importance sampling with an example.

Suppose has a standard normal distribution (i.e., with mean and standard deviation ) and

The function attains its maximum at the point and then rapidly goes to for values of that are smaller or larger than . On the contrary, the probability density function of a standard normal random variable is almost zero at . As a consequence, if we use a standard Monte Carlo approximation, we extract lots of values of for which is almost zero, but we extract very few values for which is different from zero, and this results in a high variance of the approximation error.

In order to shift weight towards , we can sample from , where has a normal distribution with mean and standard deviation .

The following MATLAB code shows how to do so and computes the standard Monte Carlo (MC) and the importance sampling (IS) approximations by using samples of independent draws from the distributions of and .

The standard deviations of the two approximations (stdMC and stdIS) are estimated by using the sample variances of and . If you run the code you can see that indeed the importance sampling approximation achieves a significant reduction in the approximation error (from 0.0084 to 0.0012).