The cumulant generating function is often used because it facilitates some calculations. In particular, its derivatives at zero, called cumulants, have interesting relations with moments and central moments.

Remember that the moment generating function (mgf) of a random variable is defined asprovided that the expected value exists and is finite for all belonging to a closed interval , with .

The mgf has the property that its derivatives at zero are equal to the moments of :

The existence of the mgf guarantees that the moments (hence the derivatives at zero) exist and are finite for every .

The cumulant generating function (cgf) is defined as follows.

Note that the cgf is well-defined since is strictly positive for any .

The derivatives of the cgf at zero are called cumulants.

The -th cumulant is

The first cumulant is equal to the expected value:

The first derivative of the cgf isSincewe have

The second cumulant is equal to the variance:

The second derivative of the cgf isWhen we evaluate it at , we get

The third cumulant is equal to the third central moment:

The third derivative of the cgf is 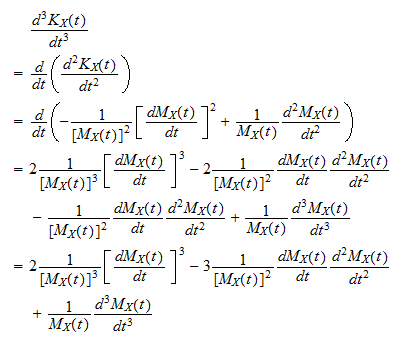 When we evaluate it at , we getBut

The relation of higher cumulants to moments and central moments is more complicated.

When is a random vector, the joint moment generating function of is defined as

provided that the expected value exists and is finite for all real vectors belonging to a closed rectangle :with for all .

The joint mgf has the property that

The existence of the mgf guarantees the existence and finiteness of the cross-moments on the left-hand side of the equation.

Having reviewed the basic properties of the joint mgf, we are ready to define the joint cumulant generating function.

The definition is basically the same given for random variables.

The partial derivatives of the joint cgf at zero are called cross-cumulants (or joint cumulants).

Cross-cumulants are denoted as follows:

First-order cross-cumulants are equal to the expected values of the entries of :

Second-order joint cumulants are equal to the covariances between the entries of : 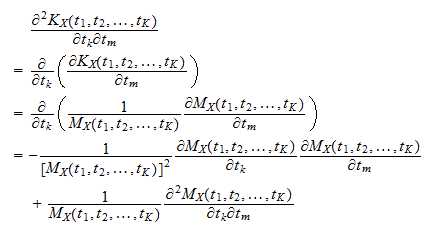