In regression analysis, a dummy variable is a regressor that can take only two values: either 1 or 0.

Suppose that we want to analyze how personal income is affected by:

To do so, we can specify a linear regression model as follows:

In the previous example, is the regression coefficient of the dummy variable. It measures by how much postgraduate education raises income on average.

Let us continue with the previous example, to see how a dummy variable looks like when the data is gathered in a matrix or table.

Suppose that our sample is as follows.

After encoding the categorical variable with a dummy, the vector of dependent variables and the matrix of regressors (so-called design matrix) will be 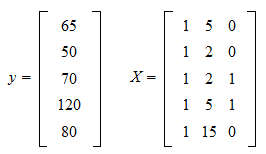 Note that the first column contains all 1s because we have included an intercept in the regression.

We might be tempted to include two dummies in our regression:

In our previous example, the design matrix would become

The problem with this double encoding is that our regressors become perfectly multicollinear, that is, one of the columns of is equal to a linear combination of the other columns.

In our example, we have 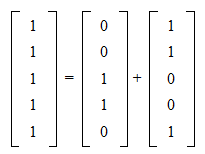 With perfect multicollinearity, the design matrix becomes singular, which implies that we cannot estimate the regression coefficients with Ordinary Least Squares (OLS).

In fact, we can compute the OLS estimator only if is full-rank. We can still compute estimators such as the Ridge, which do not require to be full-rank.

Thus, when we have an intercept in the regression model and we want to avoid perfect multicollinearity, we create only one dummy to encode a categorical variable that has two categories.

Similarly, we create dummies to encode a categorical variable that has categories.

The category that is not encoded into a dummy becomes the base category.

Let us make an example with three categories.

Suppose that our sample is similar to the previous one, but individuals have been divided into three groups (H, M and L) based on their education.

If we choose L as the base category, then we create two dummies: 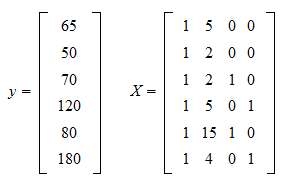 The regression equation is

The regression coefficients of the two dummies are interpreted as follows:

With the data in the previous example, we could have done: 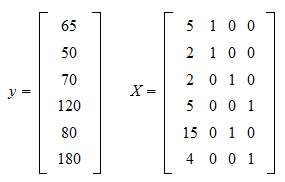 where we have encoded L, M and H into three dummies , and .

The regression equation is

The interpretation of regression coefficients changes:

In machine learning, the practice of encoding categories into dummies is often called one-hot encoding.