In this lecture we show how to derive the maximum likelihood estimators of the two parameters of a multivariate normal distribution: the mean vector and the covariance matrix.

In order to understand the derivation, you need to be familiar with the concept of trace of a matrix.

Suppose we observe the first terms of an IID sequence of -dimensional multivariate normal random vectors.

The covariance matrix is assumed to be positive definite, so that its determinant is strictly positive.

We use , that is, the realizations of the first random vectors in the sequence, to estimate the two unknown parameters and .

Since the terms in the sequence are independent, their joint density is equal to the product of their marginal densities. As a consequence, the likelihood function can be written as 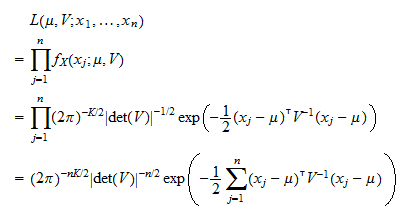 The log-likelihood is obtained by taking the natural logarithm of the likelihood function:

For convenience, we can also define the log-likelihood in terms of the precision matrix :

where we have used the property of the determinant

Before deriving the maximum likelihood estimators, we need to state some facts about matrices, their trace and their derivatives:

which is equal to zero only ifTherefore, the first of the two first-order conditions implies The gradient of the log-likelihood with respect to the precision matrix is 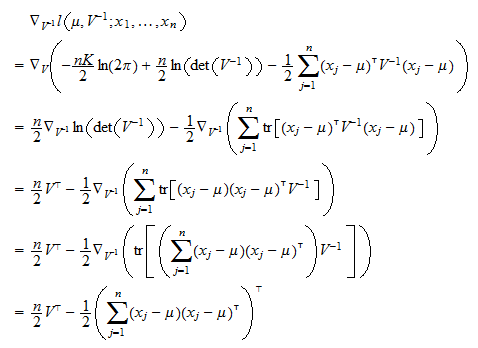 By transposing the whole expression and setting it equal to zero, we getThus, the system of first order conditions is solved by

We are now going to give a formula for the information matrix of the multivariate normal distribution, which will be used to derive the asymptotic covariance matrix of the maximum likelihood estimators.

The information matrix is

It can be proved (see, e.g., Pistone and Malagò 2015) that the -th element of the information matrix is

In more formal terms, converges in distribution to a multivariate normal distribution with zero mean and covariance matrix .

In other words, the distribution of the vector can be approximated by a multivariate normal distribution with mean and covariance matrix

Pistone, G. and Malagò, L. (2015) " Information Geometry of the Gaussian Distribution in View of Stochastic Optimization", Proceedings of the 2015 ACM Conference on Foundations of Genetic Algorithms XIII, 150-162.