The unadjusted sample variance measures the average dispersion of a sample of observations around their mean.

It is computed by averaging the squared deviations from the mean.

It is also often called biased sample variance, because, under standard assumptions, it is a biased estimator of the population variance.

It is defined as follows:

, their unadjusted sample variance is

where is their sample mean:

Suppose that the sample consists of the following observations:

We arrange the observations into a table and use the table to do all the necessary calculations: 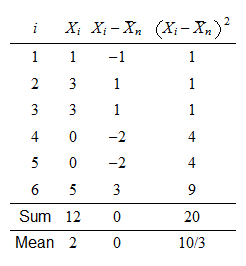 Thus, the sample variance is 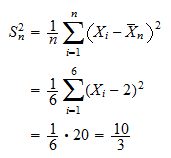 are independent realizations of random variables having the same mean and the same variance .

It can be proved (see Variance estimation) that the unadjusted sample variance is a biased estimator of , that is,

is the expected value of .

The cause of the bias

The cause of the bias is that we use the sample mean instead of the true mean in the calculation.

If were known and used in the formula in place of , then the resulting estimator would be unbiased.

How to correct the bias

In order to obtain an unbiased estimator of the true variance , we need to perform a so-called degrees of freedom adjustment:

The lecture entitled Variance estimation provides a thorough introduction to the concept of unadjusted sample variance, including a detailed analysis of its statistical properties (e.g., its bias as an estimator of the population variance).