The QR decomposition (or QR factorization) allows to express a matrix having linearly independent columns as the product of 1) a matrix Q having orthonormal columns and 2) an upper triangular matrix R.

In order to fully understand how the QR decomposition is obtained, we should be familiar with the Gram-Schmidt process.

Overview of the decomposition

Remember that the Gram-Schmidt process is a procedure used to transform a set of linearly independent vectors into a set of orthonormal vectors (i.e., a set of vectors that have unit norm and are orthogonal to each other).

In the case of a

, denote its columns by

. If these columns are linearly independent, they can be transformed into a set of orthonormal column vectors

by using the Gram-Schmidt process, which alternates normalization steps and projection steps:

, where we have defined

Thus, the projections can be written as

The orthonormal vectors can be adjoined to form a

whose columns are orthonormal.

By computing the matrix product between

, we recover the projections in equation (1). As a matter of fact, each column of the product

is a linear combination of the columns of

with coefficients taken from the corresponding column of

(see the lecture on matrix products and linear combinations).

Therefore, we have that

We now provide a formal statement of the QR decomposition.

matrix. If the columns of

are linearly independent, then

can be factorized as

matrix whose columns form an orthonormal set, and

In the previous section we have already shown a constructive proof of how the QR decomposition is obtained. The only important detail we have not mentioned is that the linear independence of the columns of

guarantees that the residuals of the projections performed in the Gram-Schmidt process are different from zero. As a consequence, the normalized vectors

are well-defined because the norms

are strictly positive. Moreover, the entries on the main diagonal of

It is time to make an example.

The norm of the first column is

so that the first normalized vector is

The inner product between

The projection of the second column on

and the residual of the projection is

The norm of the residual is

Let us verify that

The matrix with orthonormal columns is

and the upper triangular matrix is

Let us check that indeed the product of 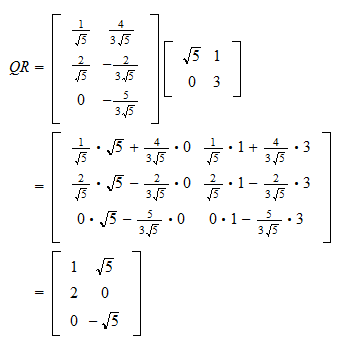 Uniqueness of the decomposition

The QR decomposition is unique.

Proposition Under the assumptions of the previous proposition, the QR decomposition is unique, that is, the matrices

satisfying the stated properties are unique.

is a second decomposition into a matrix

having orthonormal columns and an upper triangular matrix

having strictly positive diagonal elements. Since the columns of

are orthonormal, we have that

is the conjugate transpose of

If we pre-multiply both sides of the equality

If we instead pre-multiply the equality by

By plugging equation (3) into equation (2), we obtain

The latter equation implies that, for

with coefficients taken from the

-th row of the matrix

is triangular with strictly positive diagonal entries, so its rows are linearly independent and they form a basis for the space of

vectors. As a consequence, the only way to represent the

as a linear combination of all the rows of

is to put a unitary coefficient on the

-th row itself and a zero coefficient on all the other rows (by the uniqueness of the representation in terms of a basis). In other words, the

-th vector of the canonical basis. Since this is true for

is a unitary matrix (its conjugate transpose is equal to its inverse). Moreover, we have that

Since the inverse of an upper triangular matrix (UT) is UT and the product of two UT matrices is UT,

is UT. It is also invertible, which means that its diagonal entries are strictly positive. To sum up,

is both unitary and UT with strictly positive diagonal entries. Therefore, by a result on unitary and triangular matrices, we have that

and, as a consequence,

Thus, the two matrices involved in the QR decomposition are unique.

Pre-multiplication by the Q factor

matrix in the decomposition is such that

is the conjugate transpose of

has only real entries, then the conjugate transpose coincides with the transpose and the two equations above become

being decomposed is a square

But a square matrix

having orthonormal columns is a unitary matrix.

Therefore, the QR decomposition of a square matrix having linearly independent columns is the product of a unitary matrix and an upper triangular matrix with strictly positive entries.

The QR method is often used to estimate linear regressions.

In a linear regression we have an

of outputs and an

matrix of inputs whose columns are assumed to be linearly independent. We need to find the

to predict the actual values

We can simplify the formula for the OLS estimator, avoid to invert a matrix and thus reduce the computational burden (and the possible numerical instabilities) by computing the QR decomposition of

Then, the OLS estimator becomes

The latter way of writing the solution is more convenient: since

is upper triangular, we do not need to invert it, but we can use the back-substitution algorithm to find the solution

Compute the QR decomposition of

The norm of the first column of

Thus, the first orthonormal vector is

The inner product between the second column of 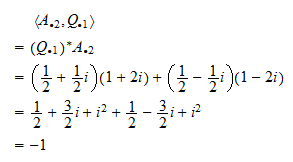 and the residual of the projection is

The norm of the residual is

The second orthonormal vector is