All the main methods used to solve linear systems are based on the same principle: given a system, we transform it into an equivalent system that is easier to solve; then, its solution is also the solution of the original system.

Definition Let andbe two linear systems, both having an vector of unknowns . The two systems are equivalent if and only if they have the same solutions, that is, if and only if

How to transform a system into an equivalent one

A system of equations can be transformed into an equivalent one by pre-multiplying both sides of its matrix form by an invertible matrix.

Proposition The system of equations in unknownsis equivalent to the systemfor any invertible matrix .

Suppose solves the systemthat is, and are the same vector. Clearly, if we pre-multiply the same vector by the same matrix , we obtain the same result. As a consequence, which is the same asThus, we have proved that

Now, suppose solves the systemWe have assumed that is invertible, so that its inverse exists. We can pre-multiply both sides of the last equation by and obtainor

Since , we haveThus, we have proved that

which, together with the implication derived previously, gives

If we multiply the first equation by and leave the second equation unchanged, we obtain a new systemThe matrix form of the new system iswhere

The new system is equivalent to the original one because the same result can be achieved by pre-multiplying the matrix form of the original system by the invertible matrixIn fact, 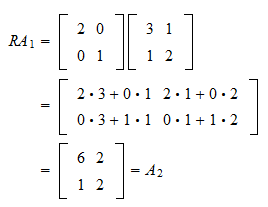 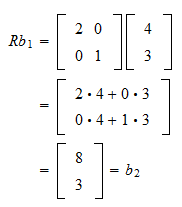