In regression analysis, the variance inflation factor (VIF) is a measure of the degree of multicollinearity of one regressor with the other regressors.

Multicollinearity arises when a regressor is very similar to a linear combination of other regressors.

Multicollinearity has the effect of markedly increasing the variance of regression coefficient estimates. Therefore, we usually try to avoid it as much as possible.

To detect and measure multicollinearity, we use the so-called variance inflation factors. 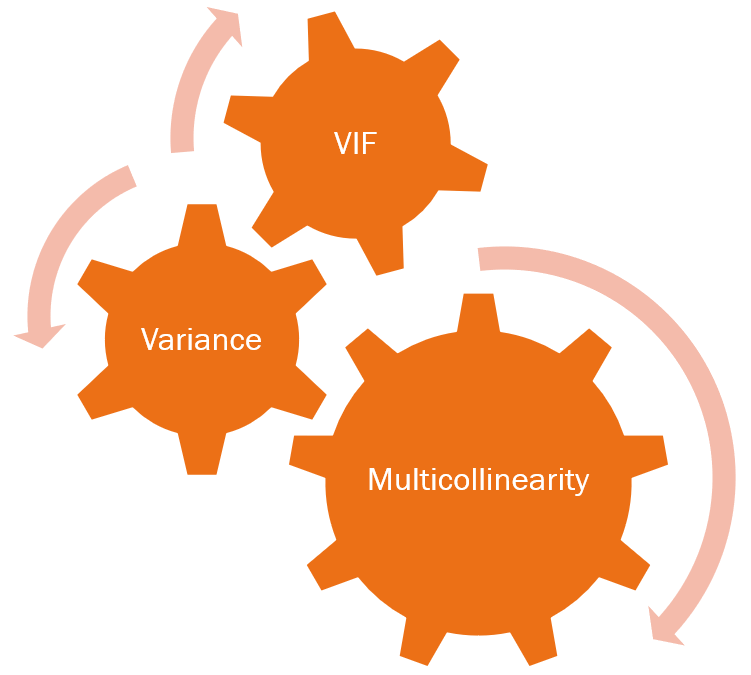 The linear regression can be written in matrix form as:where:

If the design matrix has full rank, then we can compute the ordinary least squares (OLS) estimator of the vector of regression coefficients as follows:

The variance of the coefficients

Under certain assumptions (see, e.g., the lecture on the Gauss-Markov theorem), the covariance matrix of the OLS estimator is

Therefore, the variance of the OLS estimator of a single coefficient iswhere is the -th entry on the main diagonal of .

A convenient expression for the variance

Without loss of generality, suppose that (otherwise, change the order of the regressors). We can write the design matrix as a block matrix:where is the first column of and the block contains all the other columns. Then, we haveWe use Schur complements, and in particular the formula

to write the first entry of the inverse of as:

As proved in the lecture on partitioned regressions, the matrix is idempotent and symmetric; moreover, when it is post-multiplied by , it gives as a result the residuals of a regression of on . The vector of these residuals is denoted byTherefore, 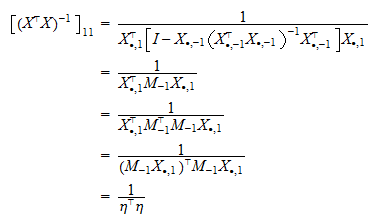 If the -th regressor is orthogonal to all the other regressors, we can write the variance of its estimated coefficient as

As in the previous proof, we assume without loss of generality that . In that proof, we have demonstrated that

If is orthogonal to all the columns in , thenTherefore,

Thus, the variance of is the product of two terms:

The second term is called the variance inflation factor because it inflates the variance of with respect to the base case of orthogonality.

In order to derive the VIF, we have made the important assumption that the -th regressor has zero mean.

If this assumption is not met, then it is incorrect to compute the VIF as because the latter is no longer a factor in the formula that relates the actual variance of to its hypothetical variance under the assumption of orthogonality.

One way to make sure that the zero-mean assumption is met is to run a demeaned regression: before computing the OLS coefficient estimates, we demean all the variables.

As explained in the lecture on partitioned regression, demeaning does not change the coefficient estimates, provided that the regression includes a constant. 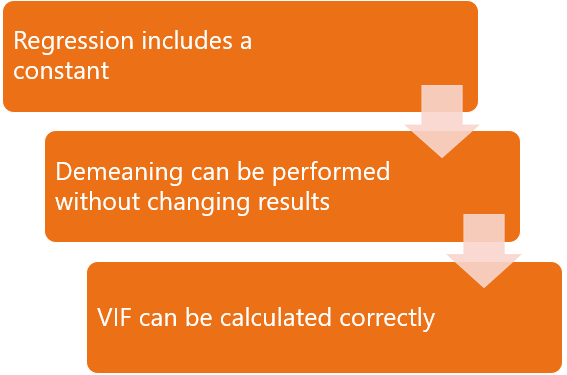 We have explained above that the VIF provides a comparison between the actual variance of a coefficient estimator and its hypothetical variance (under the assumption of orthogonality).

By definition, the -th regressor is orthogonal to all the other regressors if and only iffor all .

Denote the sample means of and by and . We assume that . Then, the sample covariance between and is Therefore, and are uncorrelated.

This is why, if the -th regressor has zero mean, the VIF provides a comparison between:

How to actually compute the VIF

We usually compute the VIF for all the regressors. If there are many regressors and the sample size is large, computing the VIF ascan be quite burdensome because we need to run many large regressions (one for each ) in order to compute different R squareds.

A better alternative is to use the equivalent formulawhich can be easily derived from the formulae given above.

We have proved thatwhich implies that

When we use the latter formula, we compute only once. Then, we use its diagonal entries to compute the VIFs.

The numbers in the denominator are easy to calculate because each of them is the reciprocal of the inner product of a vector with itself. 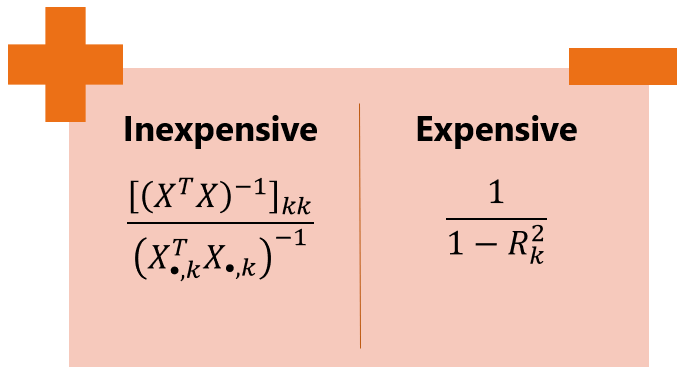 Here is the final recipe for computing the variance inflation factors:

How to interpret the VIF

The VIF is equal to 1 if the regressor is uncorrelated with the other regressors, and greater than 1 in case of non-zero correlation.

The greater the VIF, the higher the degree of multicollinearity.

In the limit, when multicollinearity is perfect (i.e., the regressor is equal to a linear combination of other regressors), the VIF tends to infinity.

There is no precise rule for deciding when a VIF is too high (O'Brien 2007), but values above 10 are often considered a strong hint that trying to reduce the multicollinearity of the regression might be worthwhile.

What to do when the VIF is high and other details

In the lecture on Multicollinearity, we discuss in more detail the interpretation of the variance inflation factor, and we explain how to deal with multicollinearity.