For any given matrix, the Schur decomposition (or factorization) allows to find another matrix that is similar to the given one and is upper triangular. Moreover, the change-of-basis matrix used in the similarity transformation is unitary.

In other words, the Schur decomposition shows that each matrix is unitarily similar to an upper triangular matrix.

Let us revise some notions that are essential to understand the Schur decomposition.

We say that two square matrices

are similar if and only if there exists an invertible

involved in the similarity transformation is called a change-of-basis matrix.

Two similar matrices have the same rank, trace, determinant and eigenvalues. Moreover, the algebraic and geometric multiplicities of their eigenvalues coincide.

We say that a square matrix

is unitary if and only if its columns have unit norm and are orthogonal to each other, in which case

has the property that

denotes the conjugate transpose of

is unitary, the similarity transformation above becomes

and we say that

Householder matrices used in the proof

In the proof that any square matrix

is unitarily similar to an upper triangular matrix

we are going to repeatedly use so-called Householder matrices.

Householder matrices are among the most powerful tools in modern linear algebra. We therefore recommend to study them in detail. However, here is a summary of what we need to know in order to understand the proof of the Schur decomposition:

We are now ready to present the Schur decomposition.

is unitarily similar to an upper triangular

be any eigenvalue of

one of its associated eigenvectors (hence,

). We can find a Householder matrix

so as to form a block-matrix

is the first column of

contains all the other columns. Since

By using the rules for the multiplication of block matrices, we obtain 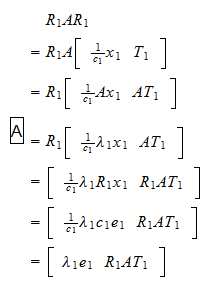 we have used the fact that

matrix (containing all the rows of

except the first one). This was the first step of the triangularization process. Let us now start the second step. Let

be any eigenvalue of

one of its associated eigenvectors. We construct a Householder matrix

is now shorter than in the previous step: its first entry is 1 and all its other entries are 0, but the number of 0s decreases by one unit. To be rigorous, we should change notation, but we keep the same notation for clarity's sake. As before, the symmetric equality

holds and, similarly to what we have demonstrated above, we have

We create a new block-matrix

, being a Householder matrix, is unitary. The first column of

has unit norm and it is orthogonal to all the other columns. Thus,

is unitary. We can now compute the product 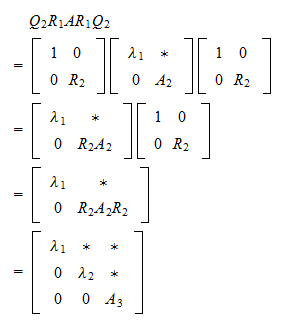 . This ends the second step of the triangularization process. The successive steps are straightforward modifications of the second one. We keep doing Householder transformations until we obtain 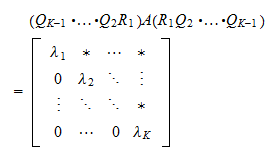 Since the product of unitary matrices is unitary, the matrix

because all the matrices involved in the product are derived from Householder matrices (which are Hermitian), possibly by adding blocks of zeros and ones which are unaffected by conjugate transposition. Therefore,

is the upper triangular matrix above (with entries

on the main diagonal).

The Schur decomposition is not unique. This can be seen easily from the algorithm used in the constructive proof above: at each step we choose an eigenvalue arbitrarily; as a consequence, there are different possible orderings of the eigenvalues of

on the main diagonal of

More in general, if

is a Schur decomposition of

, we can take any unitary matrix

is upper triangular, and use it to construct another Schur decomposition

A triangular matrix has the property that its diagonal entries are equal to its eigenvalues. Moreover, two similar matrices have the same eigenvalues. Therefore, the Schur decomposition

allows to read the eigenvalues of

on the main diagonal of

, which is upper triangular and similar to

We should compare the results derived here with those presented in the lecture on matrix diagonalization, where we have shown that if

has no defective eigenvalues, then it is similar to a diagonal matrix having the eigenvalues of

on the main diagonal.

Here are the similarity and differences:

Each of the two decompositions has its own strengths. As a consequence, they are useful in different situations.

Then, the Schur decomposition of

we can read the eigenvalues of