Matrix diagonalization is the process of performing a similarity transformation on a matrix in order to recover a similar matrix that is diagonal (i.e., all its non-diagonal entries are zero).

Once a matrix is diagonalized it becomes very easy to raise it to integer powers.

are said to be similar if there exists an invertible

We can now provide a definition of diagonalizable matrix.

matrix. We say that

is diagonalizable if and only if it is similar to a diagonal matrix.

In other words, when

is diagonalizable, then there exists an invertible matrix

is a diagonal matrix, that is, a matrix whose non-diagonal entries are zero. 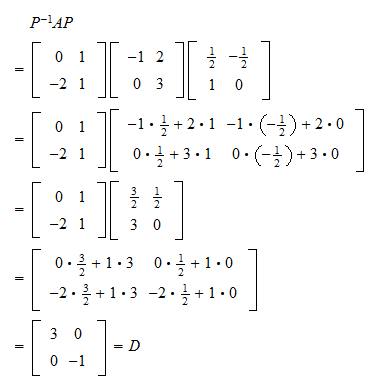 as a result. Hence,

Relation to eigenvalues and eigenvectors

We can write the diagonalization

(if you are puzzled, revise the lecture on matrix multiplication and linear combinations).

is a linear combination of the columns of

with coefficients taken from the vector

is diagonal, the only non-zero entry of

Thus, we have arrived at the conclusion that

The latter equality means that

associated to the eigenvalue

This is true for

. Thus, the diagonal elements of

are the eigenvalues of

and the columns of

are the corresponding eigenvectors.

used in the diagonalization must be invertible. Therefore, its columns must be linearly independent. Stated differently, there must be

In the lecture on the linear independence of eigenvectors, we have discussed the fact that, for some

matrices, called defective matrices, it is not possible to find

The next proposition summarizes what we have discussed thus far.

is diagonalizable if and only if it does not have any defective eigenvalue.

We have already proved the "only if" part because we have shown above that, if

is diagonalizable, then it possesses

linearly independent eigenvectors, which implies that no eigenvalue is defective. The "if" part is simple. If

linearly independent eigenvectors, then we can adjoin them to form the full-rank matrix

and we can form a diagonal matrix

whose diagonal elements are equal to the corresponding eigenvalues. Then, by the definition of eigenvalues and eigenvectors, we have that

and the diagonalization of

Remember that if all the eigenvalues of

does not have any defective eigenvalue. Therefore, possessing distinct eigenvalues is a sufficient condition for diagonalizability.

How to diagonalize a matrix

Suppose we are given a matrix

and we are told to diagonalize it. How do we do it?

The answer has already been given in the previous proof, but it is worth repeating.

We provide the answer as a recipe for diagonalization:

Importantly, we need to follow the same order when we build

: if a certain eigenvalue has been put at the intersection of the

-th column and the

, then its corresponding eigenvector must be placed in the

Let us compute the determinant 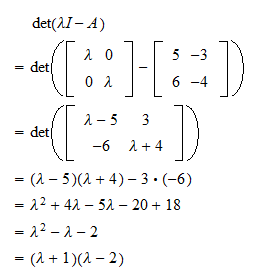 Thus, there are two eigenvalues

. There are no repeated eigenvalues and, as a consequence, no defective eigenvalues. Therefore,

is diagonalizable. The eigenvectors

we can choose, for example,

so we can choose, as an eigenvector associated to

Therefore, the diagonal matrix of eigenvalues is

and the invertible matrix of eigenvectors is

The diagonalization is not unique

is diagonalizable, there is no unique way to diagonalize it.

For example, we can change the order in which the eigenvalues are put on the diagonal of

. Or we can replace a column of

with a scalar multiple of itself (which is another eigenvector associated to the same eigenvalue). If there is a repeated eigenvalue, we can choose a different basis for its eigenspace.

Example For instance, in the previous example, we could have defined

Another possibility would have been to choose

The most important application

The most important application of diagonalization is the computation of matrix powers.

be a diagonal matrix:

Thus, all we have to do to raise

-th power is to 1) diagonalize

(if possible); 2) raise the diagonal matrix

-th power, which is very easy to do; 3) pre-multiply the matrix

Once a matrix has been diagonalized it is straightforward to compute its inverse (if it exists).

In fact, we have that

Suppose that a matrix

can be diagonalized as

First of all, let us check that 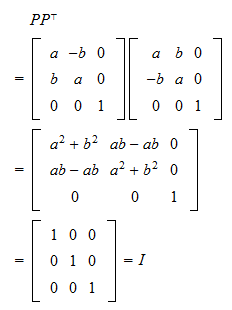 We can easily compute powers of 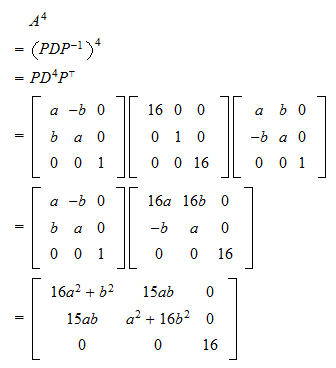