Two square matrices are said to be similar if they represent the same linear operator under different bases. Two similar matrices have the same rank, trace, determinant and eigenvalues.

We start with a definition.

is said to be similar to another

if and only if there exists an invertible

Relation to change of basis

In order to understand the relation between similar matrices and changes of bases, let us review the main things we learned in the lecture on the Change of basis.

can be represented as a linear combination of the basis

If we use a different basis

, then the coordinates of any vector

into coordinates with respect to

Remember that a linear operator

can always be represented by a

such that, for any

In other words, if we pre-multiply the coordinates of

, we get the coordinates of

. This result explains the characterization of similarity we have given in the introduction above: two similar matrices represent the same linear operator under different bases.

Proposition Matrix similarity is an equivalence relation, that is, given three

Similarity is reflexive because

where the identity matrix

is the change-of-basis matrix. Symmetry holds because the equation

is the change-of-basis matrix. Transitivity holds because

The next proposition shows a first important property of similarity.

Proposition If two matrices are similar, then they have the same rank.

be similar, so that

invertible (hence full-rank). As proved in the lecture on matrix product and rank,

have the same rank.

Trace is preserved by similarity transformations.

Proposition If two matrices are similar, then they have the same trace.

. Then, by an elementary property of the trace, we have that 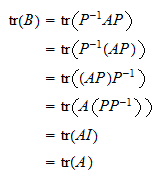 The next property concerns the determinant.

Proposition If two matrices are similar, then they have the same determinant. 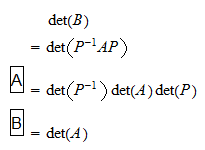 This is probably the most important property, as well as the reason why similarity transformations are so important in the theory of eigenvalues and eigenvectors.

Proposition If two matrices are similar, then they have the same eigenvalues, with the same algebraic and geometric multiplicities.

be similar, so that

while the eigenvalues of 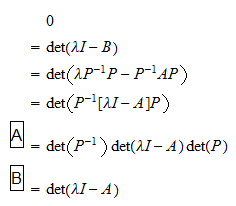 solves the characteristic equation of

if and only if it solves the characteristic equation of

if and only if it is an eigenvalue of

have the same geometric multiplicities. Note that

For a given eigenvalue

, choose an eigenvector of

and denote it by

If we post-multiply equation (1) by

, as an eigenvector of

, has geometric multiplicity equal to

for the eigenspace of

(i.e., any eigenvector of

can be written as a linear combination of

matrix obtained by adjoining the vectors of the basis:

Thus, the eigenvectors of

vector of coefficients of the linear combination. If we pre-multiply both sides of the equation by

has the same rank of

is full-rank. Therefore, it has rank

. So the geometric multiplicity of

, as an eigenvector of

, the same it has as an eigenvector of

Note from the previous proof that if

if and only if it is an eigenvalue of

In linear algebra we often use the term "unitarily similar".

Thus, two matrices are unitarily similar if they are similar and their change-of-basis matrix is unitary.

Since the inverse of a unitary matrix

is equal to its conjugate transpose

, the similarity transformation can be written as

When all the entries of the unitary matrix

are real, then the matrix is orthogonal,

and the similarity transformation becomes

The following proposition illustrates a simple but very useful property of similarity.

are similar, then their

is the same used in the similarity transformation of