This lecture defines the concept of row equivalence and proves some propositions about row equivalent matrices that lie at the heart of many important results in linear algebra.

We start with a definition of row equivalence.

Definition Let and be two matrices. We say that is row equivalent to if and only if there exist elementary matrices such that

where and are elementary matrices. Now, pre-multiply both sides of the first equation by :

The next proposition states an important property of row equivalence, known as column correspondence property.

Proposition Let and be two matrices. Let be row equivalent to . Denote by and the -th columns of and respectively. Then, for an vector if and only if

Since is row equivalent to , we have thatwhere is a product of elementary matrices:Furthermore, by the very definition of matrix product (see also here):Thus, we can substituteandin the equationso as to obtainBy pre-multiplying both sides by , we getThus, we have proved that implies . The opposite implication ( implies ), can be proved analogously.

In other words, when and are row equivalent, the -th column of can be written as a linear combination of a given set of columns of itself, with coefficients taken from the vector , if and only if the -th column of is a linear combination of the corresponding set of columns of , with coefficients taken from the same vector .

A useful corollary of the previous proposition follows.

This section introduces the concept of dominant columns, which will be used below to study the properties of row equivalent matrices.

Definition Let be a matrix. Denote its -th column by . We say that is a dominant column if and only if it cannot be written as a linear combination of the columns to its left.

Suppose is a dominant column of . Then, there is no vector

such that By the column correspondence property above, this is possible if and only if there is no such vector satisfyingAs a consequence, cannot be written as a linear combination of the columns to its left. Hence it is dominant. We have just proved that is dominant only if is dominant. The proof of the opposite implication is analogous. This holds for any . Therefore, the columns that are dominant in are dominant also in and vice versa.

The propositions above allow us to prove some properties of matrices in reduced row echelon form.

Remember that a matrix is in reduced row echelon form (RREF) if and only if:

Remember that a basic column is a column containing a pivot, while a non-basic column does not contain any pivot.

Proposition Let be a matrix in reduced row echelon form. Then, the -th basic column of , counting from the left, is equal to the -th vector of the canonical basis, that is, it has a 1 in position and all its other entries are equal to 0.

Proposition A basic column of a matrix in reduced row echelon form is a dominant column.

Proposition A non-basic column of a matrix in reduced row echelon form is not a dominant column. 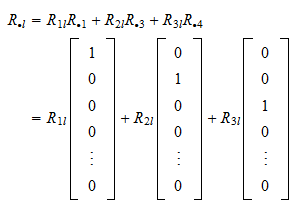 Thus, if a column is non-basic it is not linearly independent from the columns to its left. Hence, it is not a dominant column.

By combining the two simple propositions above, we get the following one.

Thus, when a matrix is in reduced row echelon form, we can use the concepts of basic and dominant column interchangeably.

We are now ready to state the most important proposition of this lecture.

Proposition Any matrix is row equivalent to a unique matrix in reduced row echelon form.

A consequence of this uniqueness result is that if two matrices are row equivalent, then they are equivalent to the same RREF matrix.

In this section we present some corollaries of the results we have proved in the previous sections.

Proposition Let be a invertible matrix. Then, is row equivalent to the identity matrix .

By the results above, we know that is row equivalent to a unique RREF matrix . Furthermore, can be transformed into by elementary row operations, that is, by pre-multiplying by an invertible matrix (equal to the product of the elementary matrices used to perform the row operations):But we know that pre-multiplication by an invertible (i.e., full-rank) matrix does not alter the rank. Therefore, is full-rank. As a consequence, all the columns of are basic (there cannot be non-basic columns because the columns of a full-rank matrix are all linearly independent from each other). But this means that the columns of are the vectors of the canonical basis of the space of -dimensional vectors. In other words, they are the columns of the identity matrix. Hence, .

Clearly, since the identity matrix is a matrix in reduced row echelon form, any invertible matrix is equivalent to the unique RREF matrix .

An immediate consequence of the previous proposition follows.

where are elementary matrices.

While the previous two propositions concern square invertible matrices, the following proposition applies to matrices that can be non-square and non-invertible.

Proposition Let be an RREF matrix that is row equivalent to a matrix . Then and have the same rank. The rank is equal to 1) the number of non-zero rows of or, equivalently, to 2) the number of basic columns of .

First of all, remember that pre-multiplying a matrix by an invertible matrix does not change the rank of . As a consequence, if (an invertible product of elementary matrices) transforms into a row equivalent RREF matrix , we have that