A covariance formula is an equation used to define or calculate the covariance between two variables.

There are several formulae that can be used, depending on the situation.

We begin with a general formula, used to define the covariance between two random variables and :where:

This is a definition and it is useful because of its generality. However, you need to use the equations below if you need to compute covariance in practice.

When the two random variables are discrete, the above formula can be written as

In other words, we sum the products of the deviations of the two random variables from their respective means. Each product is weighted by a probability.

Suppose that the probability mass function is

The calculations are performed as follows:

When the two random variables are continuous, the covariance formula involves a double integral:

How to compute the double integral

The double integral is computed in two steps:

In order to compute the expected values, we first need to find the marginal density functions:

We can now work out the covariance: 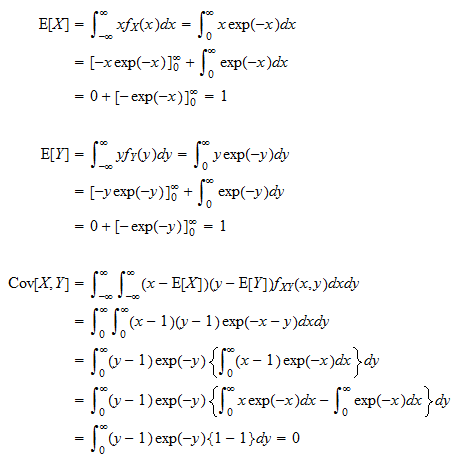 Covariance formula based on moments

Instead of using the formulae above to find the covariance, it is often easier to use the following equivalent equation based on moments and cross moments:

In the previous example, after finding the expected values of and , we could have done:

Use with moment generating function

When we know the joint moment generating function of and , we can use it to compute the moments , and and then plug their values in the formula above.

Formulae for the sample covariance

Until now, we have discussed how to calculate the covariance between two random variables.

However, there is another concept, that of sample covariance, which is used to measure the degree of association between two observed variables in a sample of data.

Given observed couples their sample covariance is calculated aswhere and are the sample means of the two variables:

The only difference is that we divide by instead of dividing by .

If the observed couples are independent draws from the joint distribution of two random variables and , then is an unbiased estimator of .

In this example, there are four observed couples, whose values are reported in the columns of the table below.

The last two rows of the table are used to calculate the means and the sample covariance (biased and unbiased).

More details about these formulae - including proofs and solved exercises - can be found in the lecture on Covariance.