All the theory of linear systems we have discussed so far (e.g., matrix form, equivalent systems, elementary row operations, row echelon form, Gaussian elimination) depends on the choice we have initially made of arranging the equations of the system vertically (one below the other) and writing their left- and right-hand sides as entries of two column vectors.

A parallel, and mostly identical, theory can be developed by arranging the equations horizontally (one besides the other) and writing their left- and right-hand sides as entries of two row vectors. In this parallel theory, which is briefly outlined below, elementary column operations (which are the counterpart of elementary row operations) play a key role. Furthermore, precisely defining column operations is worthwhile because several useful concepts in linear algebra rely on a unified treatment of row and column operations.

Remember that a system of linear equations in unknowns

Thus, we have two column vectors on the two sides of the equal sign:

In other words, we have two row vectors on the two sides of the equal sign:

This is what we meant in the introduction by "arranging the equations horizontally, one besides the other".

and we have two vectors on the two sides of the equal sign:Each row of the two vectors corresponds to an equation. By transposing everything, we get

and we have two vectors on the two sides of the equal sign:

Each column of the two vectors corresponds to an equation. To better visualize the correspondence between columns, we could write

When a system is written horizontally, we can obtain systems equivalent to it by performing elementary column operations:

These operations are completely analogous to the elementary row operations performed on systems written vertically.

Remember that elementary row operations can be performed in two alternative ways:

The same is true of elementary column operations, who can be performed:

This can be easily seen as follows. When the system is arranged vertically and the matrix obtained by performing elementary row operations is , then the equivalent system is

Adding the first equation to the second, we obtain the equivalent systemthat can be written in matrix form aswhere

We obtain the same result by 1) taking the identity matrix2) adding its first column to the second:and 3) post-multiplying and by : 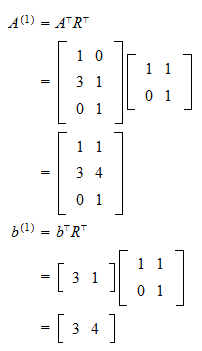 Finally, Gaussian and Gauss Jordan elimination, the two algorithms used to transform a vertical system into an equivalent system in (reduced) row echelon form, can be used on a horizontal system with straightforward modifications: whenever an elementary row operation is necessary for the vertical system, we instead perform a column operation on the horizontal system.

Write the matrix that allows us to sum twice the first column of the system in the previous exercise to the second column.

The matrix is obtained by performing the elementary column operation on the identity matrix: