The kernel of an operator, its range and the eigenspace associated to the eigenvalue of a matrix are prominent examples of invariant subspaces.

The search for invariant subspaces is one of the most important themes in linear algebra. The reason is simple: as we will see below, the matrix representation of an operator with respect to a basis is greatly simplified (i.e., it becomes block-triangular or block-diagonal) if some of the vectors of the basis span an invariant subspace.

Remember that, given a vector space

, a linear operator is a function

that preserves linear combinations, that is,

for any couple of vectors

and any couple of scalars

be a vector space and

be a subspace of

In other words, if

, then the restriction of

, is a linear operator on

be the subspace spanned by the vector

In other words, all the vectors of

is a scalar. Suppose that a linear operator

is an invariant subspace under

The kernel of an operator is invariant

The kernel of a linear operator

and all the elements of

The range of an operator is invariant

The range of a linear operator

. Therefore, the range is invariant.

The eigenspace of an eigenvalue is invariant

matrix. We can use the matrix

to define a linear operator

is the subspace of

containing all the eigenvectors associated to

By the definition of eigenvector, we have

There is a tight link between invariant subspaces and block-triangular matrices.

In order to understand this link, we need to revise some facts about linear operators.

can be written as a linear combination of the basis as

then its coordinate vector with respect to

Remember that any operator

has an associated matrix, called matrix of the operator with respect to

, such that, for any

are respectively the coordinate vectors of

We have previously proved that the matrix of the operator has the following structure:

We are now ready to state the main proposition in this lecture.

be a subspace of

so as to form a basis

We first prove the "only if part", starting from the hypothesis that

is invariant. Denote by

is invariant, then, for

and, as a consequence, it can be written as a linear combination of

enter with zero coefficient in the linear combination). Therefore, for

, the coordinate vector of

As a consequence, when

is invariant, the matrix of the operator is 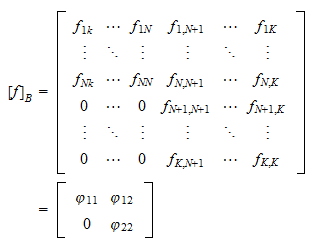 We now prove the "if part", starting from the hypothesis that

has the assumed block-triangular structure. Any vector

has a coordinate vector of the form 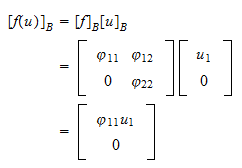 . Since this is true for any

We can also write

is the matrix of the restriction of

with respect to the basis

is said to be the sum of

, in which case we write

are linearly independent whenever

Direct sums of invariant subspaces have the following important property.

be a linear space. Let

respectively (as a consequence,

be a linear operator. Then,

are both invariant under

has the block-diagonal structure

We first prove the "only if" part, starting from the hypothesis that

are both invariant under

. By the properties of direct sums, any vector

has a unique representation

has a unique representation in terms of the basis

can be written as a linear combination of the vectors of

can be written as a linear combination of the vectors of

Similarly, we can demonstrate that the remaining columns of

which is a block-diagonal matrix with the structure described in the proposition. We now prove the "if" part, starting from the hypothesis that

is block diagonal. Since

is invariant by the proposition above on block-upper triangular matrices. Moreover, any vector

has a coordinate vector of the form 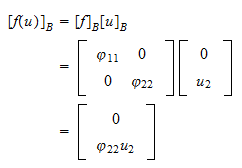 . Since this is true for any

The previous proposition can be extended, by applying it recursively, to the case in which

and all the subspaces

be a linear space. Let

so that, as a consequence,

be a linear operator. Then, all the sets

has the block-diagonal structure

What are the practical implications of everything that we have shown so far? In particular, what happens when we are dealing with linear operators defined by matrices? We provide some answers in this section.

be the space of all

We consider the linear operator

defined by the matrix

Suppose that we have been able to find two invariant subspaces

is linearly independent from

and the two vectors are non-zero.

We can choose bases

respectively and we know that

Define the following matrices by adjoining the vectors of the basis:

vectors that are guaranteed to exist because

by the invariance of

can be written as a linear combination of the basis of

). In order to match the notation used in the propositions above, we define

Similarly, we can find a matrix

As a consequence, we have

is invertible because its columns are vectors of a basis, which are by definition linearly independent.

Recall the definition of matrix similarity. The last equation means that

is similar to the block-diagonal matrix

Summary of the workflow

Thus, the process of similarity transformation of a matrix

into a block-diagonal matrix

(generalized here to the case of more than two invariant subspaces) works as follows:

This is one of the most important workflows in linear algebra! We encourage the reader to solidly understand and memorize it.

is an invariant subset.

the distinct eigenvalues of

As explained in the lecture on the linear independence of eigenvectors, when

is not defective, we can form a matrix

where the columns of

are a basis for

and the all the columns of

together are a basis for the space

column vectors. As a consequence,

Thus, we can use the matrix of eigenvectors

to perform a similarity transformation and obtain the block-diagonal matrix

Actually, in the lecture on matrix diagonalization, we have proved that

is a diagonal matrix having the eigenvalues

on its main diagonal.

is an invariant subspace under the linear transformation defined by

is a scalar. Then,

, can you find two subspaces

are invariant under the linear transformation defined by

is a block-diagonal matrix: