This lecture shows how to perform maximum likelihood estimation of the parameters of a linear regression model whose error terms are normally distributed conditional on the regressors.

In order to fully understand the material presented here, it might be useful to revise the introductions to maximum likelihood estimation (MLE) and to the Normal Linear Regression Model.

The sample is made up of IID observations .

We assume that the vector of errors has a multivariate normal distribution conditional on , with mean equal to and covariance matrix equal towhere is the identity matrix and is the second parameter to be estimated.

Furthermore, it is assumed that the matrix of regressors has full-rank.

Implications of the assumptions

The assumption that the covariance matrix of is diagonal implies that the entries of are mutually independent (i.e., is independent of for .). Moreover, they all have a normal distribution with mean and variance .

By the properties of linear transformations of normal random variables, the dependent variable is conditionally normal, with mean and variance . Therefore, its conditional probability density function is

It is obtained by taking the natural logarithm of the likelihood function: 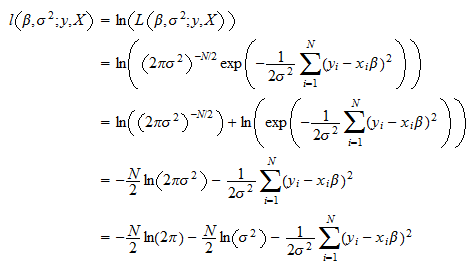 The estimators solve the following maximization problem The first-order conditions for a maximum are where indicates the gradient calculated with respect to , that is, the vector of the partial derivatives of the log-likelihood with respect to the entries of . The gradient is which is equal to zero only ifTherefore, the first of the two equations is satisfied if where we have used the assumption that has full rank and, as a consequence, is invertible. The partial derivative of the log-likelihood with respect to the variance is which, if we assume , is equal to zero only ifThus, the system of first order conditions is solved byNote that does not depend on , so that this is an explicit solution.

Thus, the maximum likelihood estimators are:

Let us compute the blocks:and

Therefore, the Hessian is

By the information equality, we have that 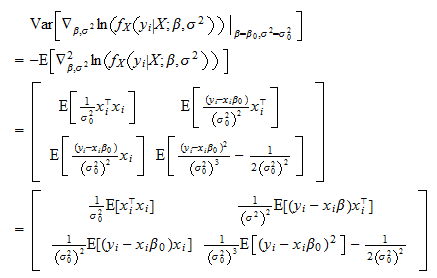 But and, by the Law of Iterated Expectations,Thus, 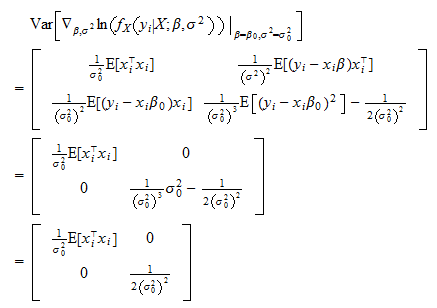 As a consequence, the asymptotic covariance matrix is

StatLect has several pages on maximum likelihood estimation. Learn how to derive the estimators of the parameters of the following distributions and models.